Recipes for the water of life 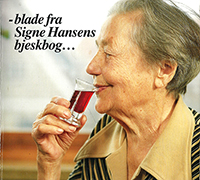 Water of Life appeared in my small world after I had met Sonja in Skagen. It was actually Sonjas former female partner Steen who put me on track. At one point we saw u "lucky" to get home opposite each other between Jerup Ålbæk and in an area called "East of the kingdom of heaven." It went well enough.

But in the fabulous nature area were gathered berries and herbs together into the great gold medal and provision of glasses and bottles subsequent to the delight of the palate.

We're back in the middle and towards the end of the 1970s.

In autumn 2010 I picked among others new shoots from myrtle and tried for the first time to make use of the plant in this way. Unfortunately for me was the fluid so good that the bottle did not hold for long.

I have the link "Urter" collected a wealth of herbs that can be used for water of life.

Under the link "Signes Opskrifter" are the original water of life recipes from Signe in Hirshals, which unfortunately does not live anymore.