to photos from the trip. 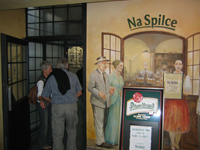 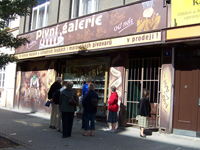 the gallery from the trip.

In September 2007 - the week after that was harvested Saarz hops in northern Czech Republic - I was a good and lovely workmate participates together with Danish Beer Enthusiasts Aalborg branch in Czech Republic on a 4-5 day ølrejse.

Beer journey started from Aalborg in North Jutland Art Museum, with departure at 18th Unfortunately, there was this unhappy that the bus trip was planned after we were driving to the Czech Republic had been "stuck" somewhere in southern Europe. Another bus was obtained, then it would go merrily down through Jutland against Krusaa / Padborg where there was little opportunity for provisioning by Otto Duborg.

Down through Jutland, there would be beer tasting of 10-12 forkellige beer sounded on paper, but it turned out beer tasting came to consist of approx. 23-25 ​​beers. From Aalborg to the border with Germany is approx. 300 km, which would give a new taste in over 10 km....

There was little provisioned by Otto Duborg and the trip continued down over Hamburg, then to Berlin and down towards Dredsen as we drove around it. From Dredsen went down towards Altenberg and to the Czech border and landed after a little running around in Louny by 10-time when the hotel was waiting with a very late breakfast.

After breakfast was consumed, was just time to look at the city. Louny proved to be a beautiful old town approx. 60 km northwest of Prague with about 20,000 inhabitants. It was incredibly cheap to sit down and savor the city's own products. 2 pint of Czech beer poured at just £ 10 at a sidewalk café with tablecloth and ashtray on the table.

We had driven from Aalborg on Wednesday evening and writes Thursday afternoon, where we're going out on a little excursion to Zatec, located approx. 20 km west west Louny. Tours are available at the local brewery in Zatec. Zatec are also Czech hop center.